Apropos of nothing at all, except that I just remembered how much I like photographing monkeys, here are three of my favorites.

Not all animals are comfortable making eye contact with humans. Some, like house cats, even actively avoid it. But monkeys don’t seem to mind one little bit.

Highly social creatures, they often watch what other monkeys are doing. This one has classic catch light in his eyes. I also like how the light is catching on all his long monkey face hair. I have another shot of this one where he bears a striking resemblance to Dubya, but that’s a different story. 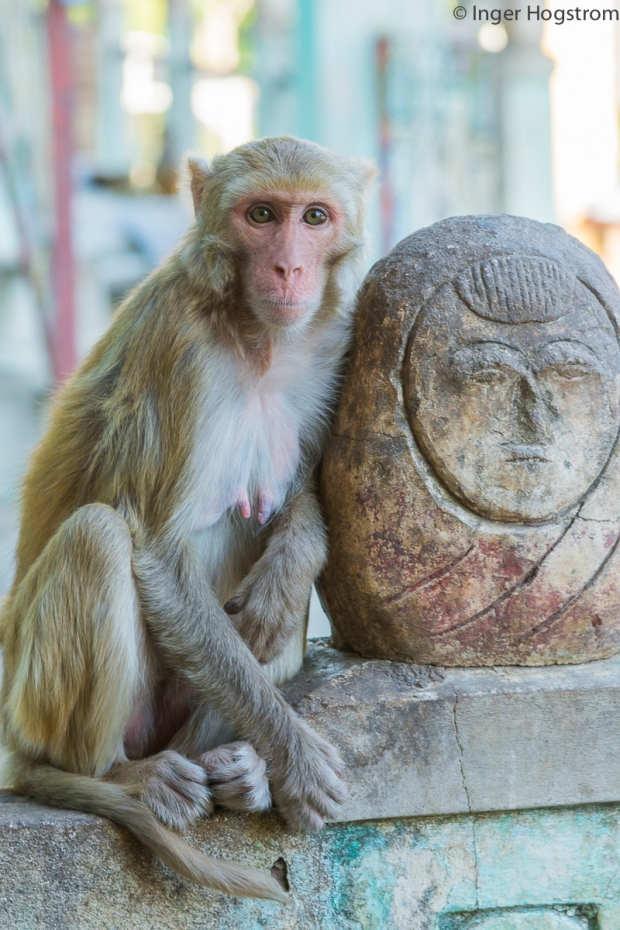 This one I just absolutely adore. She looks at me so calmly, so evenly. The macaques on Mount Popa make a game out of terrorizing tourists into dropping their water bottles and snacks on the ground so they can swoop in and grab them. This one seems to have better things to do with her time.

This past week has been crazy busy, so I’ve fallen behind on the blog-writing, but it seemed like a good time to remind everyone (living in North America that is*): we have amazing wildlife, and great opportunities to photograph it, all over. 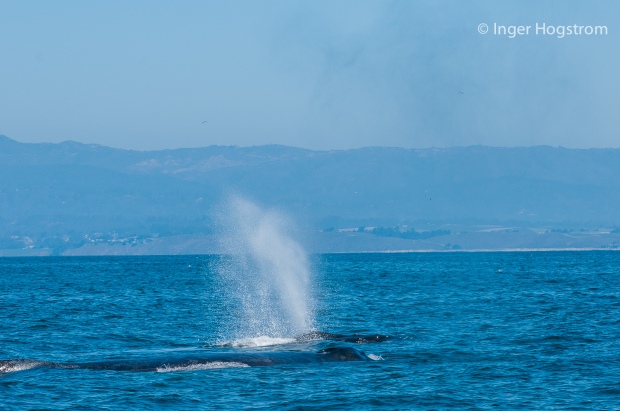 I think some of us, myself included, get a little jaded since we can just drive a couple hours (or even less), sign up for a whale watching trip, and photograph humpback (or gray) whales like it’s no big thing. It is a big thing! Just ask anyone from Europe. I didn’t understand this til I was on a whale watching trip in Iceland, and when we spotted a whale spyhopping in the distance, a French woman half-gasped, half-screamed when she saw it. She had never seen a whale. I see them often enough that if it’s not close, if it’s not in good light, I can hardly be bothered!

The trip photographed here was last year during a sardine run — there were so many humpback whales in Monterey Bay that we simply lost count of how many we saw — it got to the point that people would just gesture into the distance and mutter under their breath “whale” every time they saw one, as opposed to the excited pointing and yelling that were going on at the beginning of the trip. 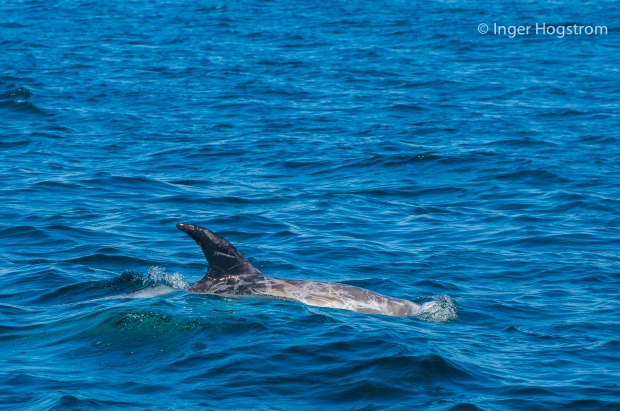 So while dreaming of faraway destinations where you can view and photograph exotic wildlife…. don’t forget that you can go out and photograph whales, flocks of migrating birds, deer, bears, eagles, coyotes, etc in pretty much every part of the United States and Canada — we have so much wildness around us.

And with that note, I’m going down to Monterey Bay to try and spot some humpbacks feeding on big schools of anchovies.

*I know there are lots of places in Europe with wildlife very nearby, but I feel it’s more immediately available in North America, with it’s shorter history of cities and large groups of people. We really did move into wildlife’s territory and that’s very clear sometimes when they come and take it back

I’ve just returned home from my most recent adventure, to the land of the midnight sun* in arctic Norway. I’m still editing pictures, but wanted to be able to share a few images from the trip. There are many more to come. We had fantastic weather, and saw a wide variety of wildlife.

We saw quite a lot of birds, but everyone’s favorite is always the puffin. I’d seen them before in Iceland, but I never really knew the way they hop around on these cliffs — it’s as if they don’t quite know how to walk, so just improvise something to get some forward locomotion. It’s adorable. 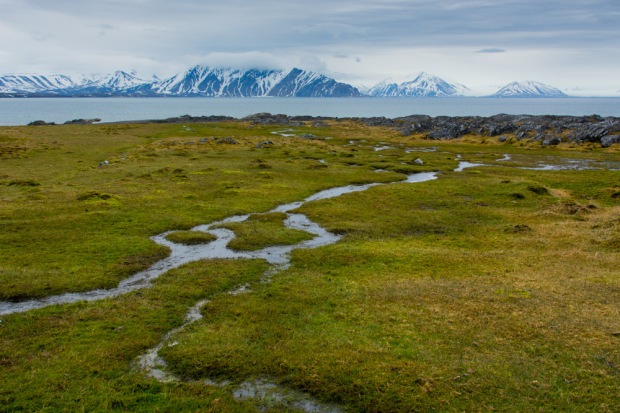 The tundra here at Vardsolbukta was incredibly rich and varied – several species of tiny flowering plants, mosses of a half a different shades of green, various lichens and such. The ground in places was like walking on pillows, the moss was so soft. It felt really strange. Things take forever to decompose in the arctic, so there are all sorts of bones and reindeer antlers, skeins of shed reindeer fur and various feathers lying around to be studied. It’s the kind of place you want to walk around bent over at the waist so you don’t miss anything.

Polar bear on the pack ice in the Hinlopen Strait, Svalbard, Norway.

And of course: a polar bear! The trip would not have been complete without one…. in the end we saw seven, a very unusual number. This one was particularly photogenic in the bright sunshine and sporting a healthy sleek coat.

There really is something incredibly special about seeing a huge predator like this in the wild. There is that little chest-tightening frisson of excitement the moment you spot it: ” *gasp* BEAR!” — even more exciting if the bridge has not announced its presence yet.

There are many more images to come, including some surprises — things I never would have expected to see on a trip like this.

*A note on the “midnight sun” — I’ve never really experienced this before. What it really is could best be described as: “noon all the time” — there is essentially no modulation in the strength of the sun at any time of day. If the sun is out its at the same height in the sky all the time. Most disconcerting. Bring an eye mask. A good one.

“Whatever you do, just don’t get bit.”

It’s not often that you hear those words, and especially not in reference to what looks for all intents and purposes like a lethargic, terminally bored seal. But, then you see the teeth. They are sharp. And apparently they are in a mouth that’s full of bacteria, not unlike a Komodo dragon. Get bit, and the deep puncture wounds will surely get infected. So don’t get bit. And don’t bother trying to run, cause they can run faster than you can. So just stare them down, make yourself big by throwing your arms out, make some noise and don’t turn your back.

That in a nutshell is your briefing on the dangers of the highly territorial and incredibly numerous Antarctic Fur Seal. You don’t expect to need to be briefed on the ways of a vicious seal. Hell, the words “vicious seal” sound like an oxymoron. But, here we are.

When we think of seals, we picture a lazy, maybe not so smart creature whose hobbies consist of napping and barking noisily at another seal who’s just stepped on them. They don’t move all that much and don’t seem very agile out of the water. They are certainly in no way frightening.

But those are not these seals.

“True” seals are ones where all their spine and hip bones are in a line. They flop around or shimmy side to side to move forward and therefore can’t do so very quickly. Eared seals, like the Sea Lion or the Antarctic Fur Seal, have hip bones set up in such a way that they can get their flippers (their feet, basically) under them and use that for forward propulsion.  That’s why you don’t want to run. They’re fast.

Personality-wise these are not the happy-go-lucky seals you see basking in the sun and napping all day. These seals are suspicious. They are short tempered. Some are clearly incensed that you have dared to walk across their beach and want to make sure that you know this. So they make a move on you. You will want to run, believe me. The first time a fur seal opens its mouth wide and lunges towards you, that’s your first instinct. 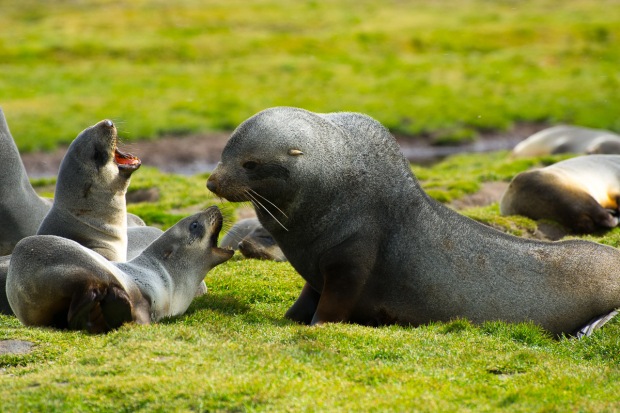 But in order to so anything at all on these South Georgia beaches, you have to navigate your way through or around them. So you are faced with scenes like this: a veritable minefield of fur seals. Making your way across that field takes careful planning and a bit of bravado. And please don’t make the mistake of coming over one of those hillocks and surprising one. You definitely don’t want to do that.

The core of the issue, from a fur seal’s point of view, is that you should not be here at all. They want to make sure that you understand this, and leave post-haste. Even the babies get in on it – the first place we landed there was one very young pup that basically chased us up the beach, teeth bared the whole way. It was quite the introduction.

The first few days I was torn between hating their horrible attitude and determined desire to take a bite out of me, and really respecting such a badass animal. As the days went on though, it became funnier and funnier. They were so angry, so suspicious, so peeved, they were really a caricature.

So I made a point to try and get a picture of every time a seal gave me a dirty look. To chronicle their suspicion. Their anger. Their side-eye. It was not that difficult.

Uh-huh. Not pulling anything over on this one.

This one’s pretending not to pay attention.

Oh, yeah he has his eye on me

Bull fur seal is watching my every move

He’s got my number

Not taking any crap, this one.

Casually scratching himself or plotting my demise?

Celebrate by sending a donation to the good folks at Penguin Lifelines.